This article serves the purpose of expressing our arguments on a data-based view of the fundraising market over time to present an outlook for the potential growth of different categories within the cryptocurrency market in the upcoming years.
The last quarter of 2022 has set a new record for the amount of capital raised in the crypto industry, recorded at $10B, thereby showing a great expectation of venture capital funds for this dynamic market. 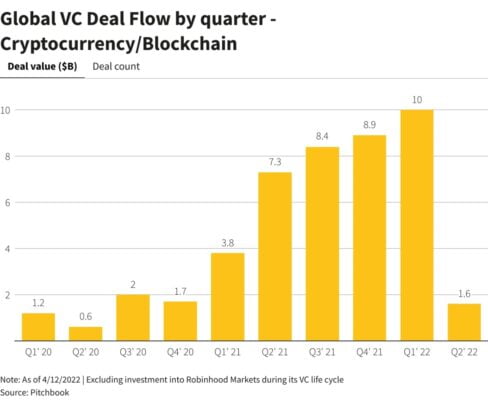 The fact that billions of dollars are poured into blockchain startups is still leaving many doubts among investors as to whether this is a “crypto bubble” and whether cryptocurrency assets are being traded at an unreasonable and unsustainable price?

We’ll compare the fundraising market in bull/bear market cycles to answer this question. Here, we will distinguish funding rounds according to 2 main stages: Pre-mature and Mature.

Market cycles refers to a trend or pattern that occurs during different market periods or trading environments. Market cycles are made up of two aspects, the highest and the lowest price, and the current cryptocurrency market is affected by Bitcoin price.

In each market cycle, we often see trends forming in a particular sector/category due to outgrowth innovation, leading to some asset classes becoming dominant because their business conditions are suitable for growing conditions.

2017 was the stage of blockchain application incubation and CeFi then was the safe choice for venture capital funds when it received the most investment and five out of eight projects came from the expansion and growth phase (series rounds). Since CeFi projects have an operation model more similar to those of traditional businesses, VCs can partially rest assured that their investment in these series rounds can potentially make some returns. 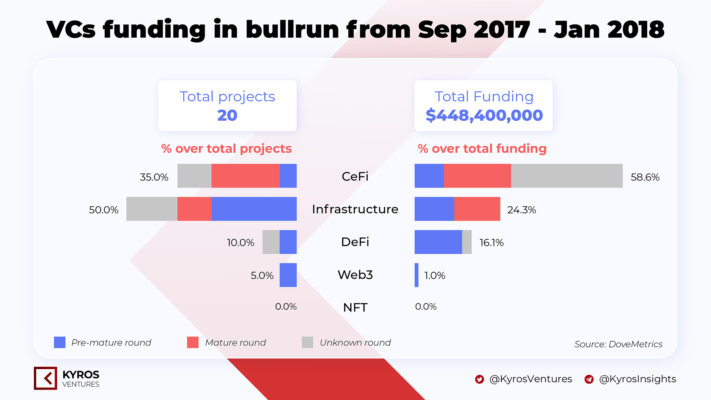 New decentralized applications (dApps) began to form during this period since the opening of the first smart contract platform, Ethereum. Thus, this is the period when VCs prioritise spraying capital for infrastructure projects as the foundational platforms are still in their infancy; moreover, this will be the first and best place to attract liquidity when dApps are built on top of them and bring viable adoption to blockchain technology.

The other reason to bet on platform projects was largely due to the congestion on Ethereum when the CryptoKitties application was born. Investment funds at the time realized the promise of decentralized applications, and at the same time, they know that more smart contract platforms are needed to overcome the bottlenecks on Ethereum. This has fueled the massive growth of platform tokens in 2017.

As many smart contract platforms were built to solve the current scalability problem of Ethereum, notably Cardano, Solana, Polkadot, etc., the next destination will be the building of the economy for users. Although CeFi is still the category that received the most investments during 2018 – 2020, Infrastructure and DeFi are the two categories with the most projects receiving investment, especially projects from pre-mature rounds. 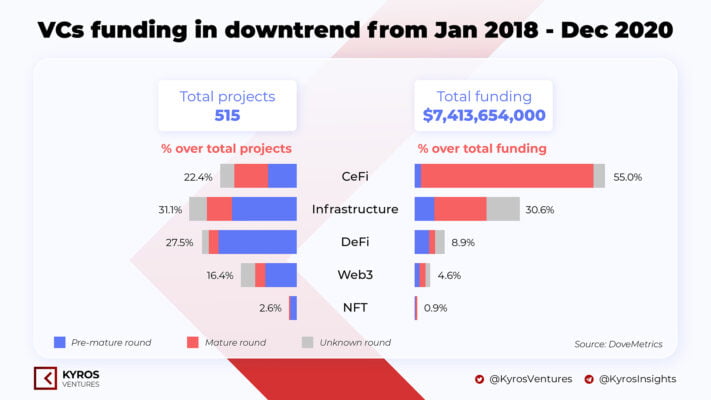 Since mid-2019, DeFi has been raised as an alternative solution for traditional banks, allowing users to transact, save and earn profits based on banking-like but non-banking financial services. Many of DeFi solutions are novel and can offer higher returns than the centralized financial market.

The DeFi wave rose shortly after June 2020 which was catalyzed by the launch of the liquidity farming program $COMP, the governance token of Compound in May 2020. The event also kicks off the DeFi Summer, when other DeFi projects distribute their tokens through liquidity mining and create more and more profit opportunities for their investors.

Afterwards, the number of DeFi projects have been continuously rising, therefore capturing attention from VCs. By the end of 2020, DeFi took the lead in the number of projects being invested. At this time, VCs showed great confidence in this new category and thus, raising the bet for this category in hope of enormous returns.

With DeFi providing a decentralized exchange solution for users, NFT emerged as a solution for content creators in areas such as music, pictures, or other artistic content. NFT is a unique asset class applied to digital assets as an intellectual property license.

By 2021, NFT was getting a lot of attention from investment funds as NFT collections like CryptoPunks, Bored Ape Yacht Club have attracted mainstream media and these projects reach the level of billion-dollar valuation.

As of May 2021, only 72 projects in the NFTs segment have successfully secured their fundraising with a total funding value of $777M compared to 180 DeFi projects at a total value of $645M. However, this number has changed significantly by the end of the year since the amount of money raised for NFT-related projects only in pre-mature rounds has risen to the 2nd place – with 151 more projects being funded. 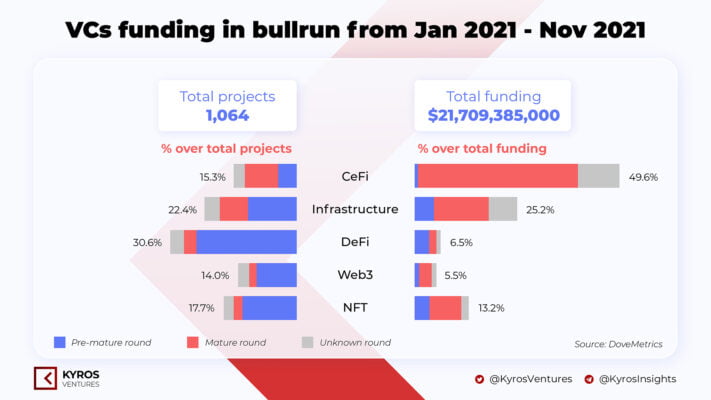 What can we see from past data?

Capital flows from venture capital funds exemplify the appropriate development of the market, beginning with the formation of the underlying platform (Infrastructure), followed by the creation of an economic system (DeFi), and then applications for content ownership (NFT).

In each stage of the market, new categories are created and will be the trend to lead the market in terms of capital flow as well as the number of new projects being born. Categories that are incubated and developed after each market cycle tend to grow more stably, and as a result, their ROI for VCs will be more saturated. 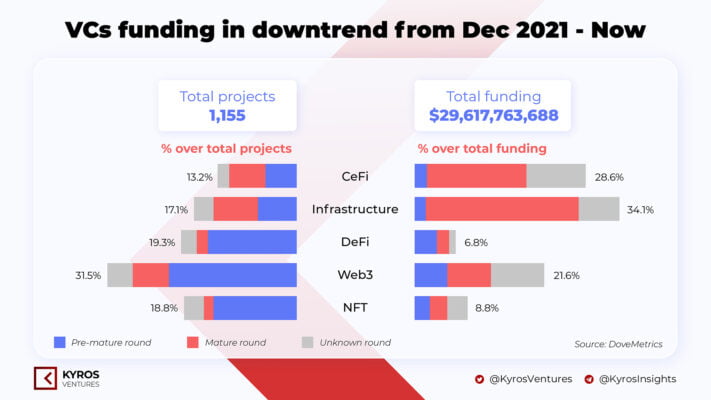 The success of the Infrastructure category has caused a gradual shift of many VCs from the segment of CeFi to Infrastructure, reflected in the total amount of capital that this category has raised in expansion rounds. The number of Infrastructure projects going into operation and revenue expansion increases, opening up a more stable, long-term profits for VCs when pouring capital into such viable models.

Besides, the smart contract platform system has entered the stage of stable development and is able to scale to a large number of users; the next possibility will be in layer applications. Prominent in the second half of 2022 came from Web3 applications, more specifically GameFi like Axie Infinity which created a massive wave of attracting many users to enter the market. 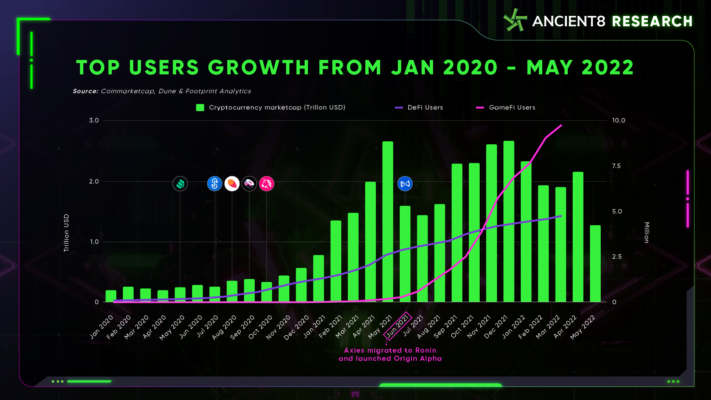 With more and more people using NFTs, these digital assets are heralding a new era of the digital world – the Metaverse era. GameFi/Metaverse can be a gateway with a more accessible approach for the masses who are not into or understand blockchain products. Web3 application layer is a combination of DeFi and NFT, an upgrade of User-Generated Content platforms like Facebook, Youtube, etc. Users can now own the content they created on Web3 and can be traded based on their demands without being controlled by any other third parties.

Besides, Web3 promises to bring many benefits for enterprises, including reducing operation processes and lowering expenses when accessing user data. Traditional gaming studios have proven this when moving their businesses up on Web3.

In conclustion, the metaverse is formed by a collection of countless user data, and every user would only want to protect their privacy, i.e. not allowing it to be centralized or owned by third-party businesses or individuals. Therefore, web3 is considered as an open gate for the realization of the metaverse through a decentralized system.

During this bearish phase of the market, as the father of Web2 – Tim O’Reilly believes that Web3 would really emerge after the burst of the crypto bubble, with the backing from VCs, quality projects in the web3 niche, especially the infrastructure platforms serving the metaverse like GameFi and will have great potential to skyrocket in the future. In addition, many other Web3 projects are working on the music industry and social networks, etc., all have similar potential that we should look forward to.